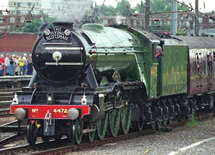 The Flying Scotsman was built in Doncaster, the first locomotive of the newly formed London and North Eastern Railway (LNER).  It left the works on 24 February 1923 with the number 1472 and was designed by Sir Nigel Gresley as part of the A1 class—the most powerful locomotives used by the LNER at that time. By 1924, when it appeared at the British Empire Exhibition in London, the locomotive had been renumbered 4472 and given the name 'Flying Scotsman' after the daily 10:00am London to Edinburgh rail service which started in 1862.  Since returning to the tracks in 2016, Flying Scotsman has been hauling special passenger tours and making appearances across the UK at heritage railways and the National Railway Museum in York.  Join us today at Dereham station restored to the way it would have looked in the late 1950s when Dereham was still an important railway junction. There is a tearoom, souvenir shop with displays of local railway artefacts. On arrival in Dereham passengers have time to get some lunch and explore the town before meeting at the Station where we board the Flying Scotsman at 14.00hrs for the exciting train ride to Hardingham and return.  Time will be allowed for photographs.